What Piano Chords are in Every Song? 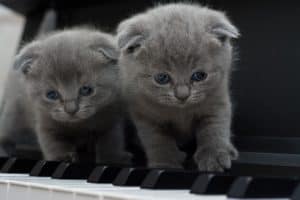 According to Google, lots of people want to know: what piano chords are in every song? If you’re here, you’re probably one of those people.

Maybe you’ve just bought your first keyboard. Maybe you’ve been taking lessons for a while and are still confused about how to play chords. Or maybe you are looking for the fastest, easiest way to play songs.

No matter what brought you here, welcome! You’re in the right place if you want some non-intimidating,  practical chord knowledge. I am all about demystifying chords and making the piano-learning process as fun as possible.

Starting With the Basics

I could write a dozen different songs with the same three or four chords, but they’d all be entirely different.

Before we can understand what kinds of chords to expect in every song, we need to know what chords actually are and why they work.

Let’s start with the most basic question. This needs to be understood long before we think about what piano chords are in every song. What are piano chords?

What Are Piano Chords?

Simply put, a chord is a group of notes (usually three) that sound good together. (1)

On the piano, a chord is played with one hand. So those three notes have to be somewhere close enough together to reach with one hand. And like I said, they need to sound good in combination with each other. But at its most basic level, a chord is just a group of notes that play nicely together.

Again, say it with me:
A chord is basically a group of three notes that sound good together.

Where do Chords Come From?

Depending on your personality, that probably sounds either too simple or overwhelmingly open-ended. So let me clarify. there are some rules behind what makes a traditional chord different than just a random collection of nice notes you like hearing at the same time. 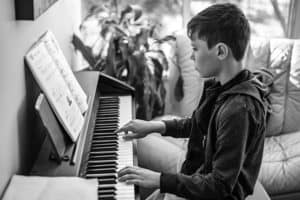 For our purposes, all you really need to know is that there are groups of notes that go together in a certain order. They’re called scales.

If you’ve ever done hours of beginner piano drills, or even seen a movie with a piano student practicing, you’ve probably heard a lot of the most popular scales already.

Chords usually take notes from only one set of scales at a time (with some exceptions). So when you hear about chords, what you’re really hearing about are groups of notes that sound good together and “belong” in the same scale.

Why are These Chords so Special?

Some people have a lot of fear or confusion around the topic of chords. If you’re one of them, you might feel like all this information is a bit anticlimactic. What’s the secret, the big deal about chords? Why do they come up so often and why are they so hard to learn?

I’m going to disprove the “hard to learn” part a bit later here. But what makes chords special is that they are the basis of so much music. So much of what you need to know to play piano (and sound good) is tied up in whether you can master chords.

These simple building blocks to music are the framework of almost every modern genre.

They allow you to stop plunking away at melodies note-by-note and making every song sound like a lullaby. They give depth and warmth to your sound as you play. And they provide a backdrop for nuance and spicing things up with improvisation. In other words, chords are game-changers!

How Many Music Chords are There?

There are 9,452 music chords… just kidding! There is no definite number to chords, because in theory you could say that just about any combination of notes could be a chord. Sort of.

But just like I could Google thousands of recipes and say that it’s possible to cook them all, that doesn’t have any real connection to what I do on a daily basis. My family has a lot of go-to meals that we eat often. We already know we like them and they’re reasonably simple to prepare.

Chords are the same way. There are endless possibilities, but what you need and use on a regular basis will be more limited.

There are only a few main chord types and variations that 9 out of 10 modern songs will use. So that’s where I focus when teaching my students! In fact, there is only an extremely small, manageable number of chords that you have to understand to play thousands of songs.

What Piano Chords are in Every Song?

So, what piano chords are in every song? Depends on what you mean by that.

Let’s take a look at the most common chord type. This is the kind that you are going to see over and over. I’m talking about… (drumroll please)… major chords!

They’re just about everywhere. But what are major chords?

Without getting too technical, a major chord is a group of three notes that start with a root note, plus two more that are found with this major chord formula: 4-3. If you know the root note, you count forward by four notes, then by three more. Playing all three notes at the same time forms the chord.

Presto! You’ve played a C major chord. (For more examples of how to play major chords, make sure you check out my free 5-day workbook.)

Major chords tend to sound a bit happy or upbeat. And it makes me happy and upbeat that they are so easy to teach.

In fact, almost every time I check my emails I see messages from new students who are blown away by how easy major chords are using my 4-3 formula! And what chords are in every song? Major chords!

Obviously, major chords aren’t the only kind there are. The second most common chord type is minor chords. These are more melancholy or emotional-sounding than major chords (2), and to play a minor chord you need to use a different formula.

If you’ve been paying close attention, you’ll see that this is only one note different than our major chord process. That’s right: all it takes to change a minor chord to a major chord (and vice versa) is to move your second finger by one note!

The More You Understand Chords, the Fewer Chords You Need to Know

Hopefully, this discussion of major and minor notes gives you some perspective. Chord-based playing doesn’t have to be too complicated. After all, if most songs are mostly major chords with some minor chords thrown in, knowing those two types of chords gives you a huge advantage in playing most songs.

Even if it turns out that there’s an advanced chord or two that you need to learn to play a certain song, so what? You’ll already be familiar with almost everything you need to know. Putting in a little extra work won’t be too overwhelming.

4-Chord Songs: How to Become a Piano Player in a Day

If you play more than two chords, you’re showing off.

Remember how I told you earlier that there was a set of common chords that are in dozens of popular songs? Once upon a time, a quirky comedy band known as Axis of Awesome put out a video. In this video they performed a bunch of songs that all used the same exact progression of four chords. It’s not exactly what piano chords are in every song, but it’s about as close as you’ll get!

What Piano Chords are in Every Song: A Fast Way to Make Your Piano Journey Easier

It turns out that, without really trying to, a huge number of songwriters have created many, many songs with 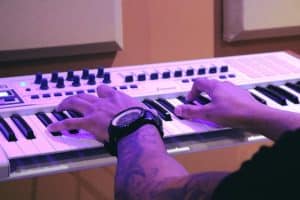 the same chord progression. Thankfully, they don’t all sound the same unless you are listening for it! But knowing this fact is going to make your life much easier.

Why? Well, put it this way. Imagine that you want to learn 10, 20, or 30 songs as quickly as possible. How can you make that easy on yourself? What can you do to make quick progress without a lot of hassle?

You’ll probably want to find songs that use the same set of skills or components, or at least have enough similarities so you don’t have to completely start from scratch with each new song. (3)

Makes sense, right? Well, I’m here to tell you that the work has already been done for you. There’s already a huge list of songs just waiting for you. All you have to do is familiarize yourself with what piano chords are in every song with the 4-chord progression to get started.

Is it Cheating if You Know What Piano Chords are in Every Song?

There, in the chords and melodies, is everything I want to say.

A common criticism I hear from skeptics (99% of whom have never even tried my resources) is that chord-based playing is “cheating” in some way. They get very offended that I am offering a faster, simpler way to start playing songs.

Here’s what I wish the skeptics understood:

Another complaint I usually hear, especially from traditional piano teachers, is that piano is supposed to be a lifelong journey. Lifelong? I don’t have time for that, do you?

I am all about making piano as simple and fun as possible. For me, that means helping my students learn chord-based playing. We start with simple concepts like formulas and what piano chords are in every song. It’s fun, and it works. 😉

If you want to move forward with more advanced piano lessons later, cool! But the first steps can be surprisingly simple, if you stick around. And I hope you do!