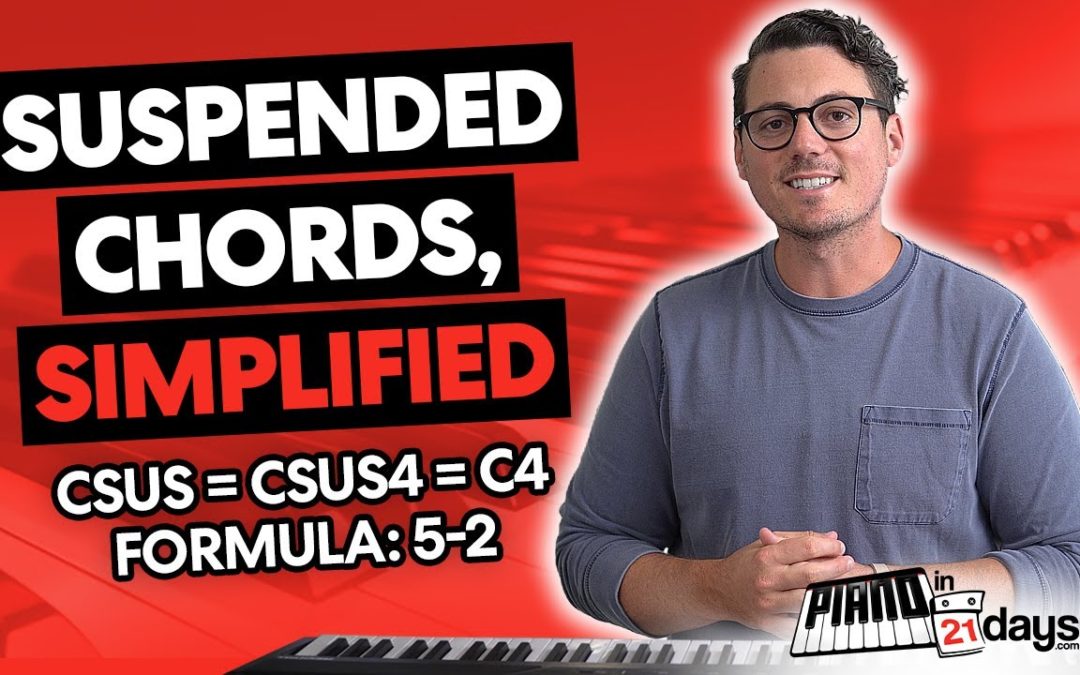 If you’ve gone through my 5-day workbook or watched any of my YouTube videos, you’ve hopefully caught onto the fact that major and minor chords are pretty simple. There are just two formulas that cover a huge majority of the chords you’ll ever see in most modern songs! Which is awesome… but what about less common chords like suspended chords?

Suspended chords (chords with “sus” in their name) aren’t too rare, just not as common as majors and minors. Fortunately, there still are formulas to follow that help keep things simple.

There are two main types of suspended chords, 4’s and 2’s aka “sus4” and “sus2.” Sus4’s are much more common than sus2’s. So in general, if we’re talking about suspended chords, you can assume they are sus4’s unless sus2’s are specifically mentioned.

Let’s take a look at the most common suspended chord type.

Like I said, you can safely assume that a suspended chord is a suspended fourth (sus4) unless otherwise noted. In fact, we can just call these fourth chords if we want to.

That means that Csus, Csus4, and C4 are all the same chord and are played the same way. Try to think of them all as suspended C.

The formula for a suspended chord is 5-2. Let’s look at how to use that formula. 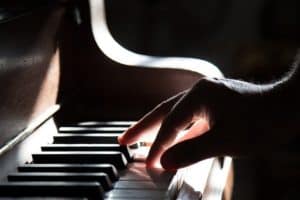 If you’re like me and use your thumb, pointer, and middle fingers to play most chords, you might need to make an adjustment for suspended chords. I play them with my thumb, ring finger and pinkie. Choose which fingers work best for you.

The 5-2 formula works for all normal suspended (sus4) chord. This is not about major versus minor, this is a completely different chord. So there are not two versions. You may see something like an F#sus, but that is still just a normal suspended chord using the same formula. 😉

What to play in your left hand to complement the suspended chord in your right hand? Simple! Just play the same bass note octaves that you would play for most other chord times. If it’s a Csus, play C notes. If it’s an Asus, play A notes. For F#sus, play F#’s.

The other, less common suspended chord type is suspended seconds (sus2). The formula is different, but still simple. It’s 2-5. That’s right, sus2 chords use the opposite formula of normal suspended chords.

So how would you play a Csus2 chord? Just place your thumb on C, count two keys to the right and place your next finger there. Count five more and place the next finger. That’s a Csus2. Easy-peasy.

Just like with most other chords, in your left hand play those same bass note octaves. C notes for Csus2, A notes for Asus2, F notes for F#sus2, and so on.

Why Are They Called Suspended Chords?

Now you may be wondering where suspended chords get their name. Try playing a few and take a guess. What do you hear?

To me, suspended chords sound unresolved, like they’re waiting to lead somewhere else. They don’t sound bad, but they don’t sound complete on their own. There’s a bit of tension or suspense, waiting for the next chord to resolve the progression.

A lot of chord progressions with suspended chords have a major chord after the suspended one. This isn’t a rule that is set in stone, but it is a very common combination. Sometimes it’s the major version of that very suspended chord.

Try playing a Csus chord and then a Cmajor. See how good they sound together? The suspended chord makes you feel like the music is leading somewhere, and the major chord wraps it up neatly. 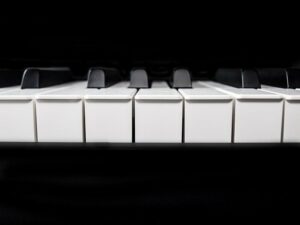 But first: if you haven’t already, grab your own free copy of my online 5-day workbook. Suspended chords should only come after you have a solid grasp of chord-based basics, and the best way to develop that is to start here.