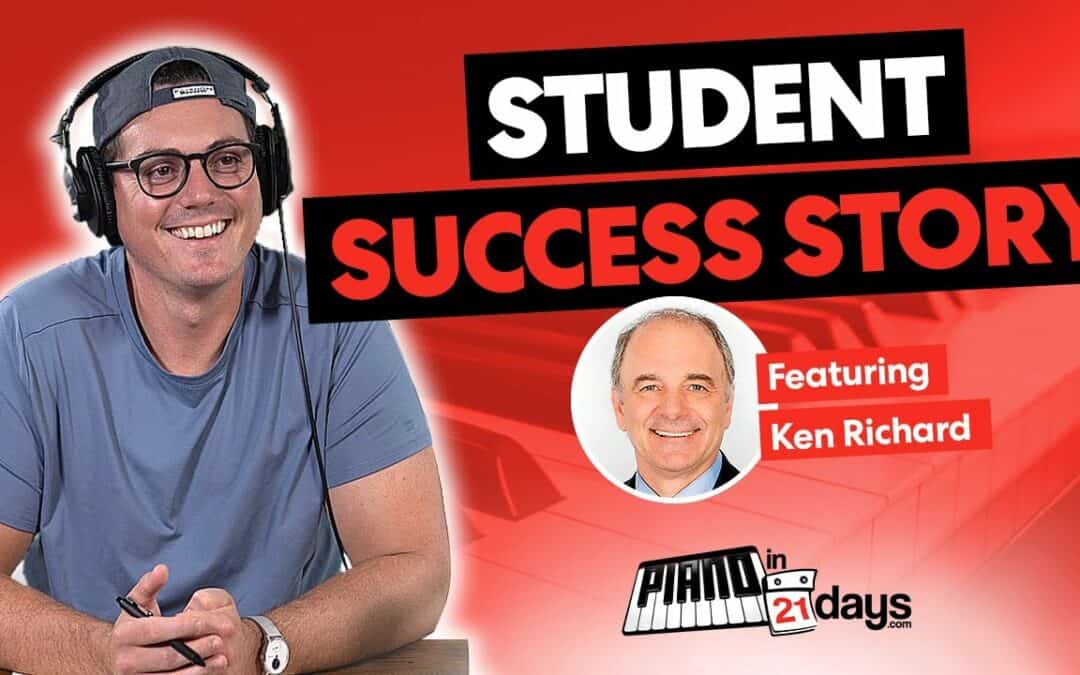 Recently, I was checking my email and saw a message from a student of mine named Ken Richard. Here’s how his email started:

Hey Jacques…. not sure if you will get this…. but my piano journey started with you about 2 years ago….   Never knew what a middle C was prior to that.  No other training ever.
I am about to release my first album of my compositions next month.   I am up to 28 compositions…
Here is my first album… enjoy…

Wow. Obviously it made my day to hear this awesome report: in fact, I was pretty blown away. So I just had to check out his music and hear it for myself. Then I was even more impressed, because it actually sounded amazing! Here’s someone who had no background in piano just a few years ago, releasing his own music. If that’s not a success story, I don’t know what is.

I reached out to Ken and asked if I could interview him: I just couldn’t pass up the chance to hear more about his story. Our conversation did not disappoint, and you can watch the full interview here:

Check out his music here: kenrichardpiano.com. You can also find him by searching for “Ken Richard” on Spotify, SoundCloud, or Amazon.

Sometimes people come to piano after years of wishing they had taken it up sooner. But sometimes there’s a lightbulb moment where you suddenly realize that this is what you want to do. Ken didn’t grow up constantly taking piano lessons. Instead, his moment of inspiration was at a concert a few summers ago with a lineup including The Eagles, Steely Dan, and The Doobie Brothers.

It was the first time in 42 years that Ken had seen the Doobie Brothers, and when they started to play one of their classic songs it was like a lightning bulb went on. That’s all it took for this family man, lawyer, and business owner to realize that he wanted to start learning to play and create his own music.

He began by going to a piano teacher they knew. Nancy didn’t usually teach adults, but she was willing to give Ken a chance: starting with songs like “Mary Had a Little Lamb.” He found he could quickly pick out basic melodies by ear, and fortunately Nancy wasn’t so traditional that she tried to make Ken learn sight-reading or keep playing nursery tunes. But he soon found himself looking online for more piano help.

When Ken stumbled across my website, he was instantly interested in my Piano In 21 Days approach. After going through my free 5-day workbook, he enrolled almost right away, and soon was speeding through the course at top speed. Once he started learning to improvise (an important theme throughout my resources), he began putting together little melodies of his own – the start of his composing journey.

I love how Ken thinks about piano learning: he views it not as something scary or overcomplicated, but just another skill. Gaining competency can feel slow at first, but as the pieces fall into place then growth begins to accelerate. It builds on itself.

What about the critics, or the people who don’t appreciate the journey? Ken maintained a positive attitude, continuing to receive feedback from his initial piano teacher Nancy, while making sure he pursued the sounds he loves and the skills he needed to play them.

As he puts it, “I don’t write for anyone else. I write for myself… It doesn’t have to be complicated.”

“I Don’t Know What That Is, But It’s Beautiful”

When Ken plays in public, people tend to stop and tell him,

“I don’t know what that is, but that is beautiful.”

In other words, out of improvisation and cultivating his ear, Ken is creating tunes that resonate with people in the way that only music can! There’s nothing like that feeling of knowing you’ve made something that strikes a chord (no pun intended) with others.

His focus is on the contemporary classical sounds that he loves, drawing inspiration from Ludovico Einaudi and others. Does that mean Ken can only play his songs, or doesn’t know how to play more popular tunes? Of course not! But you can sense the enthusiasm and passion that Ken has for playing melodic instrumentals with a cinematic flair, and it’s clearly something he’s meant to be doing. (Check out over 28 compositions by Ken here.)

A Highlight So Far

So far, Ken’s favorite moment of his song-writing journey has been to create a song based on the life of his daughter. It all started when Ken’s first teacher encouraged him to write his own music. Ken wasn’t so sure, but his daughter asked him to write a song and dedicate it to her. That sparked Ken’s creativity and motivated him to give composition a try!

Although this wasn’t planned, “Christinie” came together with a 3-4 time signature, making it a waltz. It was the song his daughter chose for their father-daughter dance at her wedding, and there wasn’t a dry eye in the place.

Whew! I started tearing up myself when I heard this story from Ken. The fact that he was able to use his newfound piano skills for the backdrop to such a beautiful moment is completely inspiring.

These days, Ken owns four pianos and is constantly encouraging others to try new things (not just piano!):

“Don’t think that you can’t do something… with all the noise in our lives, you just don’t know what you can do.”

I love this message from Ken, because I really believe that most people have the ability to learn piano inside them. They just need some way of unlocking that ability. But that can never happen if they don’t try! That’s why I’m here, and that’s what I’ve seen with my students time and time again.

Ken and I have very different backgrounds, but something we both feel strongly about is avoiding sheet music when possible. Chord-based playing, or “thinking in groups,” as Ken puts it, is just an easier, faster way that still has so much utility despite its relative simplicity. When you don’t need sight-reading to play real songs, OR to write your own, it’s so freeing. I and my students have all had different “aha” moments, but the underlying theme is keeping things as fun and simple as possible.

“Once you understand the chords and the progression… it’s so much easier… Once you get that little, basic stuff [in place], your world is now completely open to making incredible music. And the best thing about this is the gift that it is to other people.”

Being able to share music with those you love (and even strangers) is an amazing part of many of my students’ piano journeys. Ken’s not in this for the money, but he loves hearing how others find joy and encouragement through his music. His dream is to someday hear one of his songs in a movie score, and also to find ways to help more people produce and share their own music. I’m rooting for him all the way!

Is it Possible to Learn Piano in 21 Days?

During our conversation, I posed the question to Ken: is it really possible to learn piano in 21 days? Here’s Ken’s take:

I couldn’t have said it better myself!

If you’re ready to give Piano In 21 Days a try, the best way to get started is with my free 5-day sample workbook here. There’s no time like the present to begin your piano journey. 😉