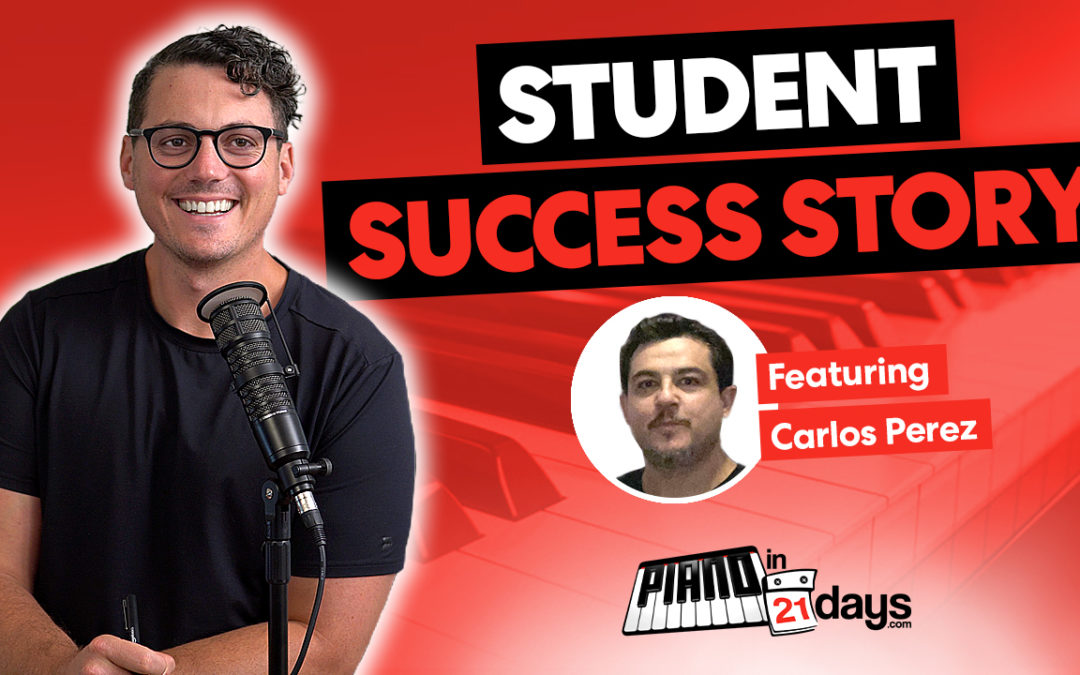 There are times as a piano teacher where I think I’ve heard it all, but every time that happens… along comes another student success story that pulls at my heartstrings and reminds me how much I love what I do! That’s certainly the case with Carlos Perez, a Piano In 21 Days student who wowed me with his passion and shared a lot of wisdom when I spoke with him recently.

When Carlos was 12 years old, he had his first experience with a piano at the church his family attended. All he had to do was touch one note, and suddenly his world had expanded! He knew that he wanted to learn to play.

But like so many other adults who tell me their stories, learning piano as a child simply wasn’t in the cards. His family couldn’t afford to prioritize music lessons. Though that couldn’t stop Carlos from dreaming, it did mean that he grew up without any chance to play piano (or any other instruments, for that matter).

Some people think that learning as a child is the only way to make real progress in music, but Carlos’ story is a great example of why that isn’t true. So, what happened?

Have you ever walked past a shop window and been so drawn to the display that you couldn’t keep walking without making a purchase? That’s what happened to Carlos about 6 years ago. By then, he was an adult with a job and a family, and his childhood dream of playing piano was just a memory.

But seeing a piano in a window one day sparked something inside him. The next thing he knew, Carlos was the proud owner of a brand new instrument! And it wasn’t cheap. Carlos spent about $900 on that piano, despite never having had a music lesson in his life.

So it wasn’t just an impulse buy: it was an investment.

But owning an instrument is a far cry from being able to play it. Carlos started out optimistic, and began looking for piano tutorials online. He found a lot of videos. But they were mostly teaching him to memorize specific notes and mimic them, not how to actually understand his instrument. So he did figure out how to plunk out some specific tunes he loved… but nothing he learned worked when he tried to apply it to other songs. It was all about memorization and parroting the videos.

Funnily enough, he remembers seeing some of my own Piano In 21 Days videos pop up when he was searching for online piano lessons. But the timing must not have been right, because Carlos didn’t sign up for my resources (yet).

Instead, he circled farther and farther into a cycle of frustration. At one point, he wanted to sell his piano. After all, it was a frustrating daily reminder of something that felt like failure. But at other times, Carlos thought it would be better to just destroy the piano itself. Why pass it along to someone else, when they would probably end up just as frustrated as him?

“I’ll Come Back to it Tomorrow”

After a while, Carlos simply walked away from his instrument. At the time, he told himself “I’ll come back tomorrow.”

Fast forward three years… he still hadn’t come back to the piano. Why bother, when he hadn’t found a system that made sense to him?

Fortunately for Carlos (and me), he didn’t get rid of his piano. After three years had passed, something sparked his interest again. And he started Googling.

Piano In 21 Days was one of the many websites that showed up in the search results when Carlos began looking for a better way to learn piano. At first, he skipped it and looked into other resources.

“Piano In 21 Days?” He was skeptical, and wondered if there was a catch. Maybe when 21 lessons were over, I’d introduce other “required” levels. Maybe what I taught wouldn’t be enough to help him feel independent on the piano. But when he finally chose to watch one of my videos, something happened:

He realized he had nothing to lose.

“Nothing Basic About It”

Carlos decided to give my resources a try. As he began to work through my 21-day course, for the first time Carlos felt empowered by what he was learning. Whereas before he had been mimicking tutorials, now he was starting to understand how the music actually worked. Notes, chords, progressions, improvisation… these building blocks were now available to him. He could finally start putting together songs!

Throughout our conversation, Carlos emphasized to me something that really made my day. Here’s what he said:

“Your course is basic, meaning you’ve made it easy to learn piano this way. But there’s nothing basic about it.”

See, I’ve really gone out of my way to make my resources as beginner-friendly and simple to use as possible. In fact, I’d like to think that Piano In 21 Days is the easiest way to learn piano! But the things you can do with that simple, beginner-friendly knowledge? The sky’s the limit.

Carlos articulated something that I really appreciated: basic information can unlock much more complex and advanced learning, if it’s taught in a way that makes sense to the student. That’s always been my goal, so it was awesome to hear Carlos describe that from his own experience. 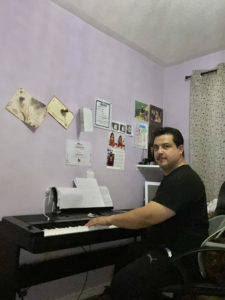 These days, Carlos’ interaction with his instrument is so different from those days when he was considering giving it away or chopping it up! Now, he can play songs he loves. Now, his wife overhears him playing and describes how far he has progressed. And now, his daughter is learning along with him because she sees just how much fun the piano can be.

And not only that: Carlos is still learning more and continuing to develop his skills. He completed the main 21-day course long ago, but then he continued with my hand coordination resources, the Melody and Ear Training course, and so on.

Here’s one thing I don’t agree with Carlos about: his story. He says it’s nothing special. I have to disagree.

When someone puts their heart and soul into their efforts, it shows. My course and my teachings can only take you so far. There is no magic pill. Carlos has done the work, not just the literal coursework but the work of persevering through frustration, trying again after failure, and continuing to challenge himself.

Seeing Carlos sit at his piano and express his enjoyment of it, and seeing his daughter there with him with a big smile on her face… those are the moments I live for as an online piano teacher. And I think “spectacular” is precisely the right word to describe his story. 😉

Something else that Carlos emphasized throughout our conversation? The importance of not giving up. See, Carlos has high hopes not just for his own continued progress, but for all my other Piano In 21 Days students new and old. His words of advice kept coming back to this important theme: perseverance.

Not everyone completes my Piano In 21 Days course in 21 days, and that’s totally fine. Everyone has different lifestyles, schedules, and goals. The important thing that held true for Carlos and that I see over and over again with other students, is staying focused and not giving up.

Whether you’re returning to piano after disappointing lessons in the past, or a complete beginner like Carlos was not so long ago, you’re in the right place. You can get started now with my free 5-day workbook. The sky’s the limit!