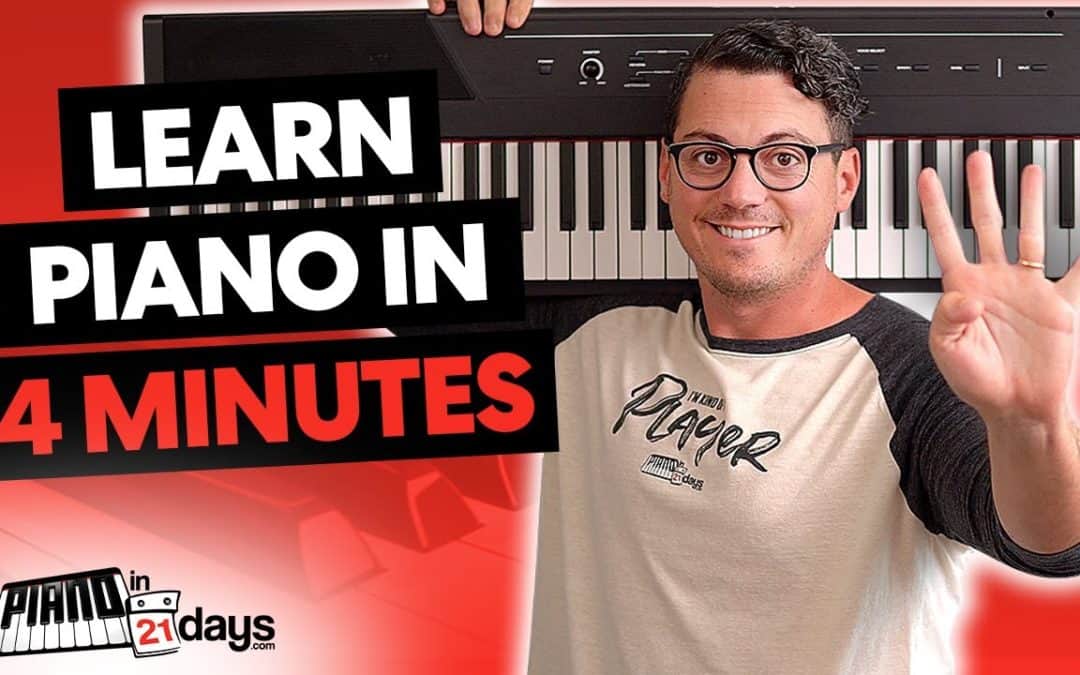 I’m keeping this post pretty simple in the spirit of my “Learn Piano In 4 Minutes (2021 Update)” video. Maybe you’ve seen the original? Four years ago I posted it on my little ol’ YouTube channel, and now over 2 million people have watched it there. Amazing!

But even a classic needs a little polishing sometimes, and I couldn’t resist re-recording now that I have better sound, lighting, and even better hair (I think 🤔) these days. Not only that, but I’ve had the unbelievable opportunity to teach thousands of people worldwide with my Piano In 21 Days online course. That means I am more comfortable in front of the camera and have even more passion about the contents of this video. Because the info I present here WORKS!

Piano doesn’t have to be scary. Learning doesn’t have to be a years-long, frustrating process. By the end of this post, you’ll have a clear picture of what you need to start on piano – so that you can actually play the songs you love.

The first thing you need to understand? What those keys are called and how you memorize them. Unfortunately, lots of people feel overwhelmed at the thought of learning their keys. After all, there are 88!

But not to fear: those 88 keys are really just multiple sets of the same notes, repeating over and over. There are 12 keys in that set, and 12 notes that you need to memorize. That’s not so bad, is it?

Why Do They Look Different?

Now you might be worried about the fact that there are two different colors of keys, and they are arranged differently. The good news is that the color difference and placement will make it EASIER for you to memorize the 12 notes on your keyboard or piano. Having one long set of identical keys would be much more challenging. 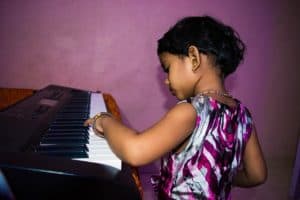 Starting at the middle note of your keyboard (we call this middle C), we can find the names of all the white keys in each set. If you know your alphabet, you can say “C, D, E, F, G” and loop back up to “A.” Use your finger to press each key, moving to the right until you come to the next identical set. That’s it. You’ve found and named the white keys.

What about the black keys? These notes are named after their relationship to the white keys they are next to. A “flat” is any black key to the left of a white key, and a “sharp” is to the left of the white key. That means each black key can have two names. But it’s still just a matter of figuring out which white note they are next to, so it’s not hard after a bit of practice and review.

It’s time to talk chords! Chords are just multiple notes that are played at the same time. They are the foundation of most songs. You want to play songs, right? Then you need to know some important chord types. Note that I didn’t say you have to know ALL the chords. To start, you just have to understand the main chord types: major and minor chords. And I have some handy formulas to help you play them without a lot of fuss.

That’s it! Counting to the right of the root note by 4, then 3 keys will always give you a major chord. You don’t even have to memorize individual chords to do this!

The minor chord formula is just as simple, but it’s reversed: 3-4. So to play a minor chord, you will be:

It’s as simple as that. These two powerful chord formulas will help you make a huge leap forward towards playing real songs you love.

Now that you know what notes and chord formulas you need to know, it’s time to talk about finding chord notation. Chords for most songs are easily found online for free.

Simply go to your search engine of choice and type in the song name + “chords.” The top search results will usually be free chord notation that you can use to follow along and practice the song. In the video, I used the example of John Legend’s “All of Me.” It took about 3 seconds to find exactly what I needed to play a basic version of the song. Easy peasy! And anyone with internet access can do it.

Once you’re comfortable with your knowledge of piano notes, major and minor chords, and how to find chord notation, what next? Then it’s to spice things up with some improvisation techniques and other tricks to really enhance and build out your sound.

With a little practice and patience, my lessons on chord-based improvisation can have you playing full, interesting renditions of your favorite tunes in a relatively short time. This is where your creativity comes in – and the newfound confidence you’re going to have as you start to understand your instrument. It’s all about building your skills and having fun.

You Can Do This

The odds are good that you can do all of this, even if you have no piano background or formal musical training. I’ve put a lot of thought into what beginners need to learn chord-based playing as quickly and easily as possible, and I want to give you the first 5 lessons from my course for free. Sound good? Sign up here and have fun getting started!