Did Paul McCartney use Piano In 21 Days??? 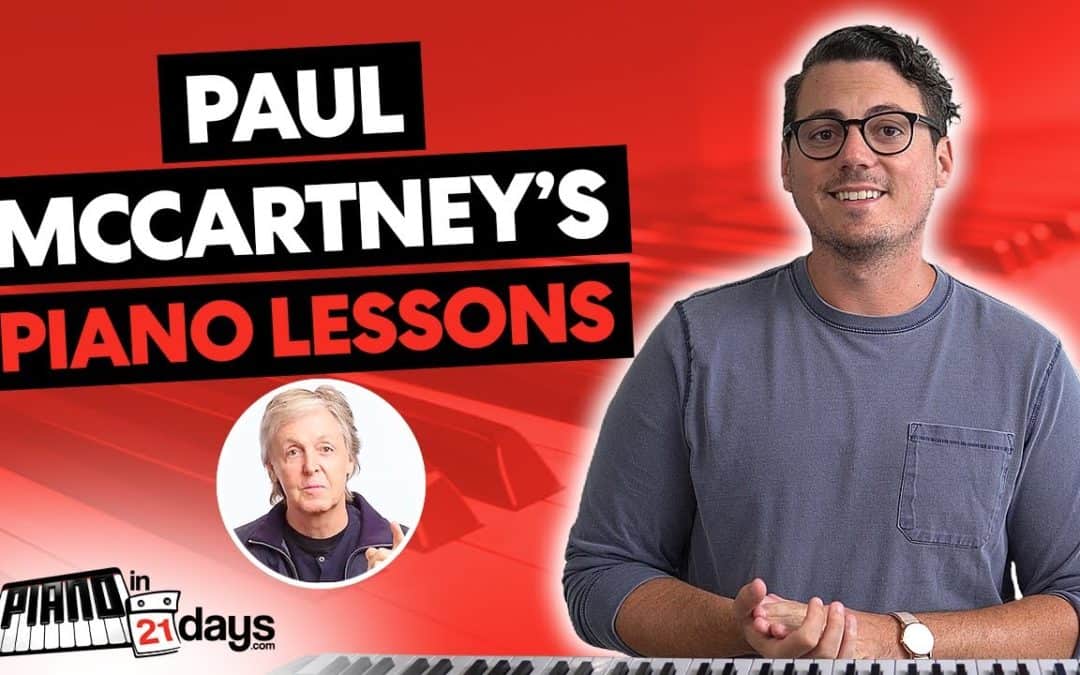 One of my students sent me a short interview of Paul talking about learning piano, and my interest was immediately piqued. In fact, he said some things which really resonated with me and how I teach piano! So I just couldn’t pass up the opportunity to talk about it.

It was an era when it was still very common for families to own pianos: sort of like how common computers and laptops have become today. The McCartney’s had a piano that Paul’s father enjoyed playing. And as a child, Paul started “noodling” around on the keys for fun, perhaps inspired by seeing his father play.

Paul’s father observed his interest in learning to play piano. but he didn’t want to teach him. Instead, he insisted that Paul take “proper lessons.” So like so many parents of the last several generations, he signed his kid up for traditional piano lessons.

Now, there are people who enjoy and benefit from traditional lessons. But there are also a huge number of us who can relate to this part of Paul’s experience:

While he makes it clear that he doesn’t want to discourage anyone from learning that way, Paul also was adamant that traditional lessons were not the right fit for him.

What *did* work for him?

“I just picked out chords on the piano. That would have been when I was about 14 or so.”

Okay, so most of us probably can’t relate to that part. Some people have a natural knack for figuring things out, and we already know that Paul is a special sort of musician. So in case it wasn’t clear, you and I shouldn’t feel bad that we didn’t just instinctively understand how to learn chords that way!

Why do I love this little story from Paul McCartney’s early years? Well, if you know anything about me or Piano In 21 Days, you can probably guess.

So many people take piano lessons as children. It seems like a good idea to a lot of parents, especially if their kids seem interested in music! But learning music doesn’t always have to follow one traditional route. Not everyone thrives in a traditional or theory-intensive learning environment. If the hundreds of emails I receive each week are any indication, a LOT of people out there are very disappointed with their childhood piano experiences.

If a certain method hasn’t worked for you but you’re still interested in the topic, the logical thing to do is stay on topic but try a different method. That’s exactly what Paul explained in his story. Not giving up on piano, just taking a different route.

Sure, it may have been a little easier for him than other people. Most people don’t just figure out the chords on their own and then somehow evolve into international pop stars. And that’s fine! I didn’t do that either, but I can play piano now with similar techniques to what Paul described.

Do you also want to be able to use chord-based techniques on the piano? Are you (or your kid, as long as they’re not too young) ready to try a less traditional method that can help you play Beatles’ tunes like “Let It Be” (and so much more)?

You don’t have to figure it all out on your own. In fact, I have intentionally put together a system that takes the guesswork and confusing theory out of the process as much as possible. That means you get to focus on learning real, practical piano skills that get you playing real, popular songs without all the hassle of traditional lessons.

You can do this. Even if you’re not the next Paul McCartney. 😉